From the outset I want it made clear that I don’t just run around calling every woman crazy, but full disclosure : I’ll jokingly use the term lightly for people I’ve known and I don’t mean it literally in most cases. In this case, however, I mean it in the sense that I don’t understand her motives, behaviors, and actions when looking at them as a sane person. I’m not a psychologist. At best – I’m an armchair “I’ve read about psychology” amateur. I don’t know how many parts it will take to tell this story, but people I’ve told pieces of it to over the years have thought “that’s just too crazy to be true”. To that end, I say : I promise I’m not making any of this up, and I’m going to do my best to recall everything I can and to not make any exaggerations (beyond opinions) along the way. I’m also not going to pretend I was a perfect saint.

When I was turning 26, I was fortunate that my birthday (Oct 29th) happened on a Friday night. That made the entire weekend – what I call “Halloweekend” – into an extended birthday party. At the time, I was working an office job so I still actually needed weekends for partying. On my birthday, Nad‘s girlfriend – let’s call her Lisa – found a nice dark/evil club for us to go to, just up the road from our apartment. It was called The Dragonfly. As we were walking towards my car, I said “all I want is good music and the hope that I’ll see some titties before the night is out” 1which is what I say every birthday. On our walk to my car, Lisa said “hey Mitcz!” and I looked up and she flashed me. I laughed and clapped and she said “now you just need good music!”. While she was a real cunt to Nad later in their relationship, that was a pretty cool move, and I’ll always appreciate it.

We walked into the club and it was glorious. Freaks as far as the eye could see, packed in like sardines. I was ecstatic. I’ll never forget that the first song I heard walking in was Duran Duran’s Wild Boys 2confession : I love me some Duran Duran, and if you’ve never heard it – check out this cover of my favorite Duran Duran song. I asked Lisa for a favor : “if you see me talking to a girl I clearly want to be talking to — just come up and say something about my birthday”. She said she had it handled.

While walking around the club, I walked through one of the two hallways that lead from inside to outside, and saw what I said at the time was the most gorgeous woman I’d ever seen. To this day, all I can recall is her face surrounded by a halo of blurry light. I saw literally nothing else around her, just this fucking incredibly beautiful woman. I even told Lisa “holy shit I just walked past the most gorgeous woman I’ve ever seen”. I nodded my head towards said woman and Lisa said “hooooooly shit! go talk to her!”. But, see, that’s not how I roll. I don’t think I’ll ever be the guy who just walks up and talks to a beautiful woman. I usually find some kind of “trick” way into a convo instead. As luck would have it, this girl had the same game plan towards me. 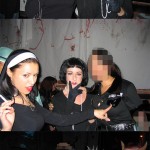 The girl — let’s call her Lauren for this story, but I’ll refer to her as The Girl for now — turned out to be there with a group that included a nun, a 50s-era Hollywood Starlet 3try not to hate me for not knowing her actual costume – I simply didn’t care enough to ask and a life-sized Spongebob Squarepants costume. At the time, I carried a digital camera with me, so I said “can I take a photo?”, not knowing The Girl was part of this crew and just wanting a shot of the Spongebob guy’s costume. Spongebob guy got out of the way, and I ended up taking a photo of just the nun and the starlet. After that first photo, The Girl jumped in and said “hey I want a photo!” and I took a second photo. After that, she was showing me her tattoos and she yelled “get a photo of us!” while I looked at her neck. She later said that photo was because “I just wanted proof that you touched me”.

We talked for a minute before Lisa jumped in with “Birthday Boy needs a drink!”. The Girl was skeptical. I showed her my ID to prove that it was, in fact, my actual birthday. She said “Okay – I’m buying your drink!”. Lisa had done her job perfectly.

I’m not one for shots, but I was trying to be as casual go-lucky as I could be with this girl. We ended up doing shots of Absolut Raspberri, and then we decided to watch the costume contest, where she hoped her buddy in the Spongebob costume would win. I tried to pay attention, but she got in front of me and just grabbed me and we started making out. That might’ve been the first time (and one of only a few times even to this day) I’ve ever kissed someone at a club.

After our brief makeout, she asked what I was doing later. I said I’d just planned on going home and going to bed. She said “wrong answer”, so I said “… that’s what I WAS going to do. NOW, I’m just wondering what WE’RE doing”. She said she was going to go home and change, cause her costume was uncomfortable, and she’d meet me at my apartment.

Shortly after I got home, she texted me and said she was on her way. I told her to call when she was close so I could buzz her into my apartment complex garage. She parked her Mercedes-Benz, and stepped out wearing this beautiful business-woman suit. I said “oooh.. you classy!” (in a joking manner, but thinking “she’s way too classy for a schlub like me”), and we went up to my apartment.

When she stepped into my room, she shut the door and hit the light (but I’ve always got low-light going outside of the main light). She stood in the middle of my room and said “are you gonna take my clothes off, or just make me stand here?”.

I removed all of her clothes, and realized she had fake tits. I said “these are… surgically enhanced”.

Quick side-note : prior to that moment in my life, I made a “rule” to myself that I’d never fuck a woman with fake tits. I had held to that rule for 26 years, and I had no intentions of breaking it. But, in this moment, I was faced with the decision to keep my rule, or fuck this beautiful woman.

We had sex many times over the course of that night, and I woke up next to her the following morning and we fucked again a time or two. She said she had some errands to run with a friend of hers, but said “I hope this wasn’t a one-night stand” on her way out.

We spent most of the day texting back and forth, and made plans to hang out again that night for Halloweekend Part 2. I was head-over-heels, and still in shock. This was the woman for me – a woman who made the night prior the best (even to this day) birthday of my life. 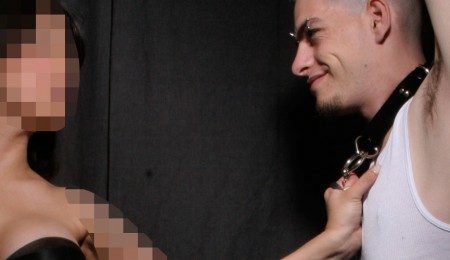 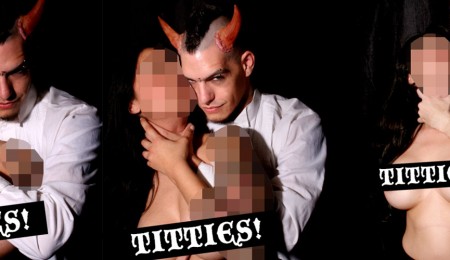 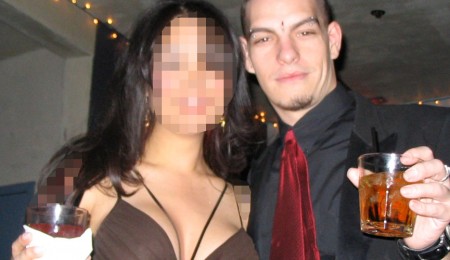 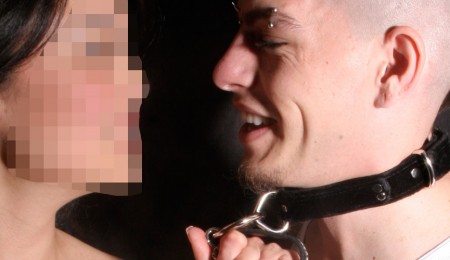